Halloween is a time for fun and games, but it's also a time when security cameras capture some strange and spooky moments.

In this blog post, Noorio will take a look at some of the most bizarre Halloween moments caught on camera. From ghosts to ghouls, these images are sure to give you the chills. So please sit back, relax, and enjoy our Halloween security camera roundup. When it comes to scary moments, nothing is quite as spine-tingling as those caught on camera. Security cameras are designed to capture everything that happens in their line of sight, which means they often capture some truly terrifying moments.

From ghosts and ghouls to masked intruders, here are five of the scariest moments caught on security camera:

In 2014, employees at a hotel in Scotland captured what appeared to be a ghostly figure on their security cameras. The figure, which was captured on multiple cameras, seems to materialize out of thin air and wanders the halls before disappearing just as quickly. While there's no definitive explanation for what was captured on camera, many believe it to be the ghost of a former guest who died in the room where the footage was captured.

Here is picture from https://www.scotsman.com/arts-and-culture/ghost-caught-camera-drum-castle-1522371.

2. The Ghoul of Manchester Airport

In 2013, airport security cameras in Manchester captured footage of a figure that many believe to be a ghoul. The creature was seen wandering around the airport terminal late at night before vanishing into thin air. While there's no clear explanation for what was captured on camera, many believe it could be a residual haunting from a tragic event that took place at the airport years ago. 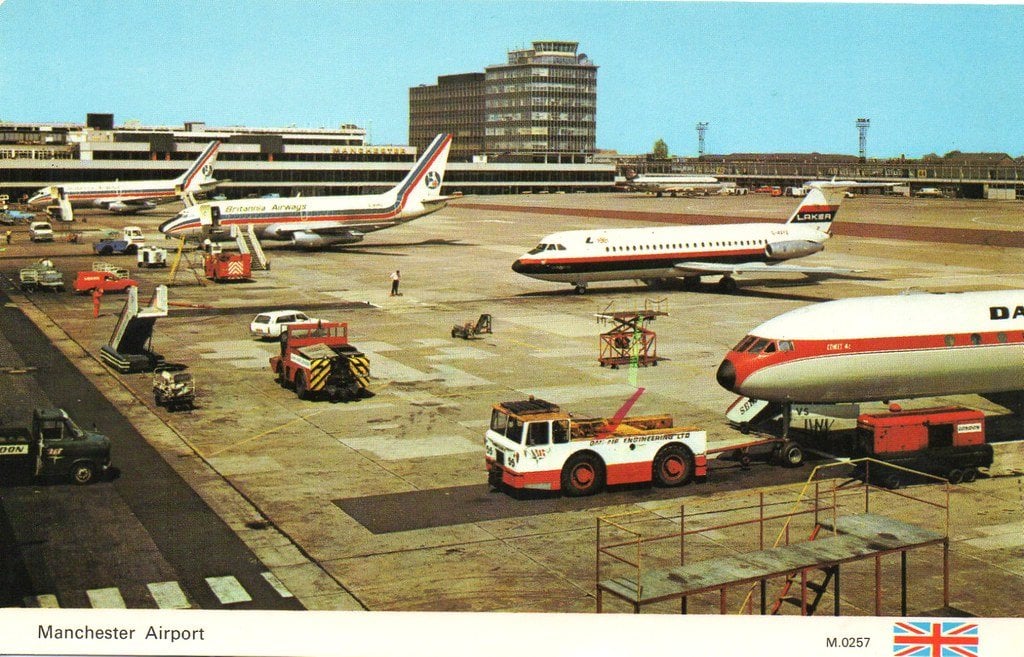 In 2012, home security cameras in Texas captured footage of a masked intruder attempting to break into a home. The intruder can be seen walking around the house's perimeter before trying to break in through a window. Thankfully, the homeowners were able to scare the intruder away before he was able to gain entry into the home.

In 2010, security cameras at an elementary school in Ohio captured footage of what appeared to be two ghostly children playing in the hallway. The children can be seen running and laughing before disappearing into thin air. While there's no clear explanation for what was captured on camera, many believe the children could be the ghosts of former students who died tragically while attending the school.

In 2009, security cameras at a mall in Pennsylvania captured footage of an elevator that appeared to be haunted. The footage shows the elevator doors opening and closing on their own and objects moving around inside the elevator without anyone touching them. While there's no clear explanation for what was captured on camera, many believe the footage is proof that a ghost or other supernatural entity haunts the mall.

The top 5 most bizarre moments caught on security camera

From a security guard dressed as a clown to a woman in a chicken mask, these are the top 5 most bizarre moments caught on security cameras.

In 2016, a security guard in Argentina was caught on camera dressing up as a clown and scaring people. The guard, who was later fired, said that he was just trying to "have some fun" and didn't mean to scare anyone.

2. The Woman in the Chicken Mask

A woman in China was caught on camera wearing a chicken mask and stealing clothes from a store. It's unclear why she decided to wear the mask, but it did help her avoid being identified by security cameras.

3. The Man with the Fake Gun

In 2014, a man in Russia was caught on camera carrying a fake gun and attempting to rob a bank. He was quickly apprehended by police and arrested.

In 2015, a cat burglar in England was caught on camera breaking into homes and stealing items such as jewelry and coins. The cat, who was later captured by police, is believed to have stolen from over 30 homes in the area.

In 2016, an intruder in Australia was caught on camera breaking into a home while completely naked! The man, who appeared to be under the influence of drugs or alcohol, caused extensive damage.

The top 5 creepiest places to install a security camera

1. A Haunted House - If you're looking to really get your guests' attention, install a security camera in a haunted house. It will ensure that everyone is on edge and watching their step.

2. An abandoned building - This is the perfect place to install a security camera if you want to make sure that no one is sneaking around where they shouldn't be.

3. A graveyard - This may seem like an obvious choice, but it's still a great place to install a security camera. Not only will it help deter would-be vandals, but it will also capture some truly creepy footage.

4. A dark alleyway - Another great choice for a security camera is a dark alleyway. This is the perfect place to catch criminals in the act or to keep an eye on any suspicious activity.

5. Your own home - And finally, don't forget that your own home can be one of the creepiest places to install a security camera. After all, who knows what goes on behind closed doors?

One family's home security camera captured a special moment on Halloween night: a trick-or-treater in costume! The little ghost or goblin was caught on surveillance camera approaching the front door and reaching for the doorbell.

It's always fun to see what Halloween looks like from a security camera's perspective. This year, we've seen everything from kids in costumes to adults in costumes to pets in costumes! We even spotted a few cleverly disguised burglars trying to take advantage of the holiday.

But this footage of a trick-or-treater is just too cute. It's a reminder that Halloween is still a time for innocent fun despite all the spooks and scares.

Schools across the country are tightening security to prevent vandalism and other crimes. Many administrators are turning to security cameras to help them keep an eye on students and staff.

One school, in particular, had an incident where vandals were caught on camera damaging school property. The footage showed several students throwing rocks and eggs at the building. The damage was significant, and the school is still working to repair it.

It is just one example of why security cameras are so important in schools. They help keep everyone safe by deterring crime and catching criminals in the act.

It's that time of year again when ghosts and goblins come out to play. And while most people are busy preparing for Halloween parties, businesses are preparing for the increased risk of theft and vandalism. Unfortunately, sometimes employees take advantage of the situation and steal company property.

Security cameras are a great way to deter theft and catch offenders in the act. But even the best security system can't prevent all crime. That's why it's important to review your footage regularly, especially during Halloween.

One business learned this lesson the hard way when its security cameras captured employees stealing candy from the office kitchen. The footage showed several employees helping themselves to the candy bowl; one even pocketed a few pieces.

Theft is a serious issue for any business and taking steps to prevent it is important. Don't hesitate to review your security footage if you suspect someone is stealing from your company. You may be surprised at what you find.

How to keep your home safe this Halloween?

If you're like most people, your home is your sanctuary. You work hard to keep it clean and comfortable and want to ensure it's safe from intruders. But on Halloween, all bets are off. Ghosts, goblins, and witches aren't the only creatures out and about on October 31st. Many thieves are also looking to take advantage of the holiday chaos.

So how can you protect your home this Halloween? Here are a few tips:

By following these simple tips, you can help keep your home safe this Halloween!

While we may not always be able to see them, security cameras live always watching. And sometimes, they capture some truly bizarre moments. Like the one caught on camera at a Halloween store in 2016 when a man in a skeleton mask suddenly appeared and started scaring customers. Or the footage from a school in Pennsylvania that showed what appeared to be a ghost walking down the hallway.

These are just a few of the eerie incidents that have been caught on tape by security cameras. So next time you're out and about on Halloween night, remember that you might be being watched by something otherworldly.